Nespresso Brings Back KAZAAR and DHARKAN as part of the Permanent Grand Crus! 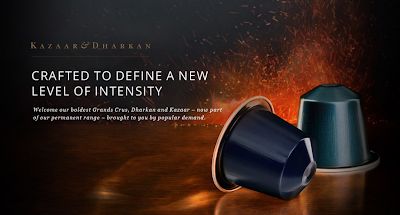 Originally launched as a Limited Edition in 2010, Kazaar, the most intense Nespresso blend yet, is back and is here to stay! Responding to Club Members' requests, Nespresso is introducing Kazaar for the third time, this time permanently, making it the only Limited Edition Grand Cru to be released more than once. 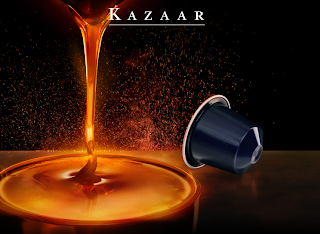 Kazaar
Kazaar is authentic and powerful with a raw intensity of 12 – the strongest in the Nespresso Grand Cru collection. Its powerful bitterness and notes of pepper, nutmeg and cloves are balanced by a full and creamy texture. The intense coffee is a daring blend of two Robustas and a separately roasted Arabica from South America. Its unusual origins and blending method, together with its strength create a one-of-a-kind taste experience. 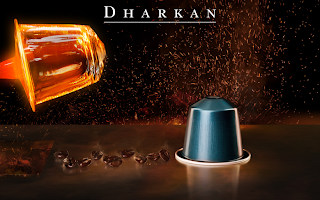 Dharkan
Dharkan is exceptionally intense, yet distinctively silky.  This Grand Cru is a complex blend with hints of bitter cocoa powder and toasted cereals, comprised of washed Arabicas from Latin America and Asia.  Dharkan was created using a technique of long roasting at low temperatures unveiling the powerful, seductive and velvety character of the blend.  Its silky and smooth texture creates a subtle balance of bitterness that lingers on the taste buds.  Dharkan also breaks the existing Nespresso scale with an intensity of 11.
With the new addition of Kazaar and Dharkan, the Nespresso Grand Cru permanent collection has expanded to include six new coffee offerings over the past year – Kazaar, Dharkan, Linizio Lungo, Vanilio, Ciocattino and Caramelito. The permanent range of Nespresso Grands Crus now includes 21 coffees.
Source: www.nespresso.com